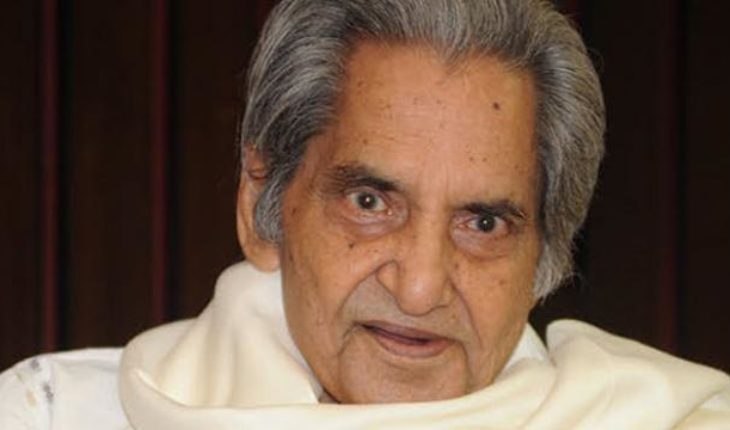 The last rites of legendary Hindi poet Gopal Das Neeraj were held in Aligarh with full state honours on July 21. The doyen of Hindi poetry Gopal Das Neeraj passed away on July 19 at the AIIMS trauma centre in New Delhi, at the age of 93. The Padma Bhushan awardee, suffered from a head injury after falling at his house in Agra.

Gopaldas Neeraj was awarded Padma Shri in 1991 and Padma Bhushan in 2007. Though he began his career as a poet, he has also penned many Bollywood chartbusters like ‘Karvaan guzar gaya, gubar dekhte rahe’, ‘Dard Diya Hai’, ‘Asawari’ and ‘Likh Likh Bhejat Pati’, which brought him much wider reputation.

The President and Prime Minister of India took to social media to express their condolences after the news of his death broke. While PM Narendra Modi wrote, “Shree Gopal Das “Neeraj” ji, revered by eminent poet, songwriter padamashari and padmabhushan, is an irreplaceable loss to the literary world, I pray to God the peace of his soul ,Lord! Give patience to their kin in this sad Bella”.

President Ramnath Kovind noted, “Sad to hear of the passing of veteran poet and lyricist Gopal Das Neeraj. From “Prem Pujari” to “Cha Cha Cha” his compositions and film songs are still remembered, still heard and still stir the soul. Condolences to his family, friends and admirers #PresidentKovind”

Before he gained name and fame as a lyricist, Neeraj had worked in a Meerut college where, it is said, he was accused of not taking classes. Angry at the allegations, he quit the institution and joined another one in Aligarh where he taught Hindi.

The famed poet who was born in Purvali village of Uttar Pradesh’s Etawa district lived in Maurice road of Janakpuri, Delhi for some years, after which he moved to Bombay. A few years later, Neeraj again decided to shift back to Aligarh.

Rich tributes were paid to him at Aligarh Muslim University by the Vice-Chancellor Tariq Mansoor and other prominent writers and poets with whom he was associated after he shifted to this city in the mid-1950s. Uttar Pradesh cabinet minister Laxmi Narayan Chaudhary were also present along with senior officials.

Mansoor described Neeraj as an epitome of India’s rich heritage of harmony, tolerance and pluralism. The vice-chancellor said that by willing to donate his body to the Jawaharlal Nehru Medical College, the eminent poet had shown the way even after his death. “His death has left a void that will never be filled,” he added.

Urdu writer-professor Shafey Kidwai said Neeraj had a long emotional connect with this institution, as the Bollywood movie ‘Nai Umar Ki Nai Fasal’ — the first film for which he penned the lyrics — was largely shot on the AMU campus.

It was this film that carried the song ‘Karvan Guzar Gaya, Gubar Dekhte Rahe’, which took Neeraj to dizzy heights, not just in the world of poetry, but also in the world of film music.

Kidwai said a singular feature of Neeraj’s poetry was that he wrote in a language which could rightly be described as Hindustani, because it included a large portion of purely Urdu words as well as Hindi.

Separately, Renowned Urdu poet Rahat Indori described Neeraj as a “secular poet”. “The biggest thing about Neeraj is he was equally popular on both Hindi and Urdu platforms, and commanded the same amount of respect and love in both (literary worlds),” Rahat Indori reportedly said.

“Neeraj was not only a secular Indian, but also a secular poet. The problem we face these days is Hindi poets turn ‘Hindu’ at Hindi Kavi Sammelan (poetry gatherings) and Urdu poets turn ‘Muslim’ at Urdu programmes. But Neeraj was not at all like this. He always spread and shared love with everyone,” the noted Urdu poet said.

“Neeraj symbolised an era of poetry. People have listened to him for more than half a century and understood his philosophy of life,” Indori said, adding that the void caused by Neeraj’s death will never be filled.