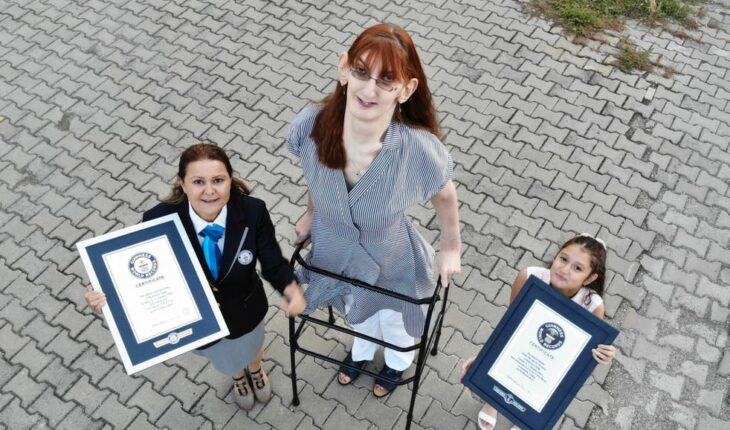 Rumeysa Gelgi from Turkey has been confirmed as the tallest living woman in the world with a height of 215.16cm (7ft 0.7in). Ms. Gelgi, broke the Guinness World Records for the second time.

In 2014, at the age of 18, she was titled the tallest living female teenager by Guinness World Records.

Ms.Gelgi’s condition is caused by a very rare disease. She suffers from Weaver Syndrome, which escalated growth. The condition also causes other abnormalities like skeletal maturation. She generally uses a wheelchair and she can also walk for short periods of time using a walker.

Weaver Syndrome is a rare genetic mutation. In a video released by Guinness World Records, Ms. Gelgi said that she is the first case of the Weaver Syndrome in her country as far as she is aware.

She also mentioned, “I was born with some serious physical diseases, such as scoliosis. And also I am a physically disabled person, who is mostly wheelchair-bound and I can ask only with my walker.”

Ms. Gelgi said that she was bullied during her childhood and she has received immense support from her family. She also expressed that though people get fascinated by her, most strangers who passed by her on the streets were also kind to her.

Guinness World Records shared the post by quoting her in the caption, “Being different is not that bad. It can make you achieve things you never imagined before.”

“Bless you, Ms Gelgi. Wishing you continued health and prosperity always,” someone comment.

A report published by USA Today quoted Craig Glenday, Editor-in-Chief of the Guinness World Records, “Her indomitable spirit and pride at standing out from the crowd is an inspiration. The category of tallest living woman is not one that changes hands very often, so I’m excited to share this news with the world.”